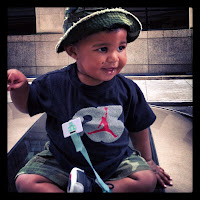 PARENTS OF CLIENTS   One of the most prominent emotions expressed by our clients is fear. As these women discuss their thoughts surrounding the life of their baby, we ache when we witness their parents feeding into that fear by encouraging their children to abort. Please pray for these parents as they make a decision regarding the life of their grandchild.

MINISTRY FINANCES   As CPC continues to grow and reach more women in record numbers, please pray for steady and reliable donations to help avoid the valleys of financial difficulty. We echo Proverbs 30:8-9 – “Keep falsehood and lies far from me; give me neither poverty nor riches, but give me only my daily bread.”

NEW STAFF   Please pray for the two newest members of CPC’s development team – Lisa and Katelyn. Pray for our Heavenly Father to inspire their words and strengthen the relationships they build, all for His glory.

PRAY FOR CPC’S EXPECTANT MOTHERS AND THEIR LITTLE ONES.   Their names* and due dates are listed below.
*Some of the names have been changed to protect the identities of our clients.

Kelly Clinger, former background vocalist for Britney Spears and current spokesperson for the Silent No More Awareness Campaign, shares her recent personal experience with these legal rulings outside an abortion clinic in Florida.

“When I first started visiting the sidewalks of abortion clinics to pray and minister, I had NO idea that late term abortions were even legal. I remember hearing about the Partial Birth Abortion Ban in 2007 and assumed (like most) that this stopped abortions late in a woman’s pregnancy.

Shock can’t even begin to describe my feeling when I first counseled on late term day. “These girls are SO pregnant”, I kept thinking to myself. Of course that’s silly since there’s no such thing as being a “little pregnant”, but I couldn’t get over the size of their beautiful bellies so full of LIFE. These women have felt their babies kick. Many of them even know the sex of the child and this is sometimes the reason for the abortion. These girls have carried these babies for 6 months. They are more than halfway done!

I just cried and cried. I couldn’t even speak at first. Not only is the size of their bellies overwhelming but the hardness of their hearts is just as shocking. I began to think about family members, friends, and co-workers of these girls who know they are pregnant. Is our society so lacking of accountability that they will return to their lives and no one will think this is a problem?
This past Wednesday my friend John posted a picture of a girl who arrived at OWC to abort her twin baby girls. She already had daughters and didn’t want anymore. She was about 20 weeks along, but because she was pregnant with twins, she had a BIG belly. Within a few hours, the picture went viral. I began to get phone calls & emails from friends who had no idea this was going on. Many offered financial help and MANY offered to adopt her babies. Thousands of people all of over the world were praying that this girl would change her mind…and thousands were saying the picture was a hoax or that what she was doing was illegal.
I found myself repeating over and over again, “Abortion is legal in America up to the day you give birth.”
…

The girl I mentioned earlier ended up aborting the twin girls in her womb even though we had every kind of help she would ever need ready for her. She admitted that she didn’t want girls and that she had no compassion for the babies she was carrying. Through a 2 day process, she actually had to go into labor and deliver her sweet babies into a toilet. Abortions like these happen ALL over the country EVERYDAY.”

More than 50 million pre-born children have lost their lives to abortion since 1973.

*“Status of Abortion Laws in the United States”, 2010 Sanctity of Human Life Guide, Focus on the Family, p. 30.
Posted by cpcfriends.com at 6:00 AM No comments:

Email ThisBlogThis!Share to TwitterShare to FacebookShare to Pinterest
Labels: abortion, in the media

Save the Date: Annual Prayer Gathering for LIFE 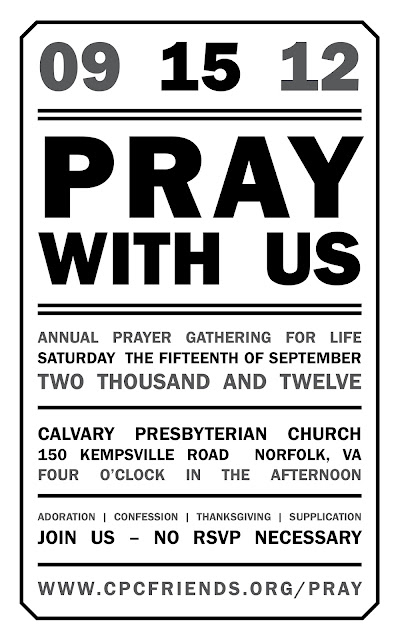 Learn more at www.cpcfriends.org/pray
Posted by cpcfriends.com at 6:30 AM No comments:

A Sinful Woman Forgiven
36  One of the Pharisees asked him to eat with him, and he went into the Pharisee's house and reclined at the table. 37  And behold, a woman of the city, who was a sinner, when she learned that he was reclining at table in the Pharisee's house, brought an alabaster flask of ointment, 38 and standing behind him at his feet, weeping, she began to wet his feet with her tears and wiped them with the hair of her head and kissed his feet and anointed them with the ointment. 39 Now when the Pharisee who had invited him saw this, he said to himself, “If this man were a prophet, he would have known who and what sort of woman this is who is touching him, for she is a sinner.” 40 And Jesus answering said to him, “Simon, I have something to say to you.” And he answered, “Say it, Teacher.”
41 “A certain moneylender had two debtors. One owed five hundred denarii, and the other fifty. 42  When they could not pay, he cancelled the debt of both. Now which of them will love him more?” 43 Simon answered, “The one, I suppose, for whom he cancelled the larger debt.” And he said to him, “You have judged rightly.” 44 Then turning toward the woman he said to Simon, “Do you see this woman? I entered your house; you gave me no water for my feet, but she has wet my feet with her tears and wiped them with her hair. 45  You gave me no kiss, but from the time I came in she has not ceased to kiss my feet. 46  You did not anoint my head with oil, but she has anointed my feet with ointment. 47 Therefore I tell you, her sins, which are many, are forgiven—for she loved much. But he who is forgiven little, loves little.” 48 And he said to her, “Your sins are forgiven.” 49 Then those who were at table with him began to say among themselves, “Who is this, who even forgives sins?” 50 And he said to the woman, “Your faith has saved you; go in peace.”

During the OCTOBER BABY summer fund-raising event last week, President Toby DeBause encouraged attendees to reflect on God’s abounding grace and remember that abortion is not ‘the unpardonable sin.’

Tullian Tchividjian, in his blog on The Gospel Coalition, shares meaningful perspective of God’s grace as shown in Luke 7.


“More than wanting to avoid an uncomfortable situation, she wanted to be clean-she needed to be forgiven. She was acutely aware of her guilt and shame. She knew she needed help. She understood at a profound level that God’s grace doesn’t demand that you get clean before you come to Jesus. Rather, our only hope for getting clean is to come to Jesus. Only in the Gospel does love precede loveliness. Everywhere else loveliness precedes love.
…
If you are a Christian, you are right now under the completely sufficient imputed righteousness of Christ. Your pardon is full and final. In Christ, you’re forgiven. You’re clean. It is finished.”


If you are searching for healing and hope after abortion, please connect with our abortion recovery ministry.  All groups are confidential and ongoing.  Email arm@keimcenters.com or call 757.499.4444.
Posted by cpcfriends.com at 6:30 AM No comments: